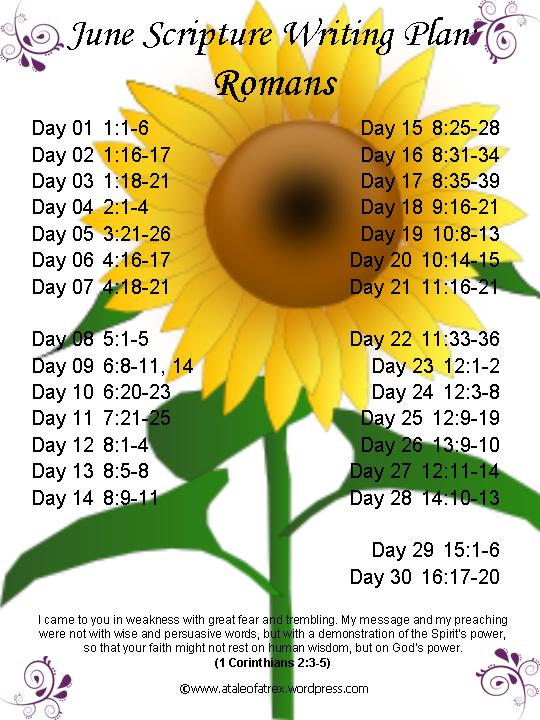 The apostle Paul fascinates me.  His story is unbelievable when you think about it.  He was a Pharisee what made it his personal mission to kill all followers of “The Way,” followers of Jesus Christ.  He hated believers.  He hunted them down, and was determined to remove them all from the face of the earth.  If any one man was consumed by hatred, it was Paul (still known then as Saul).

Paul spent his life traveling the world, sharing the word of Jesus with anyone that would listen.  His life’s mission went from seeing all believers physically dead, to seeing that the spiritually dead became believers.  He preached.  He spoke.  He ran the good race, because God saw something in Saul that could change the world for the cause of Christ.  And as Paul, his impact was felt the world over.

I have created a scripture writing plan for June based on the book of Romans, the first book in the New Testament written by Paul.  My goal is to create a new writing plan each month for each of Paul’s books.  I look forward to this journey, and I hope you enjoy the journey with me.

Feel free to share this writing plan with your friends, family, church, anyone that you think might enjoy it.  If you share it on your own blog, or on social media I simply ask that you credit me as the creator of the writing plan, and add a link back to “A Tale of a T-Rex.”

A Tiny Ray Of Light
thedrabble.wordpress.com/

I dont have the answers, just a lot of questions.

Luke 12:35 Be dressed in readiness, and keep your lamps lit.

A TALE OF A T-REX